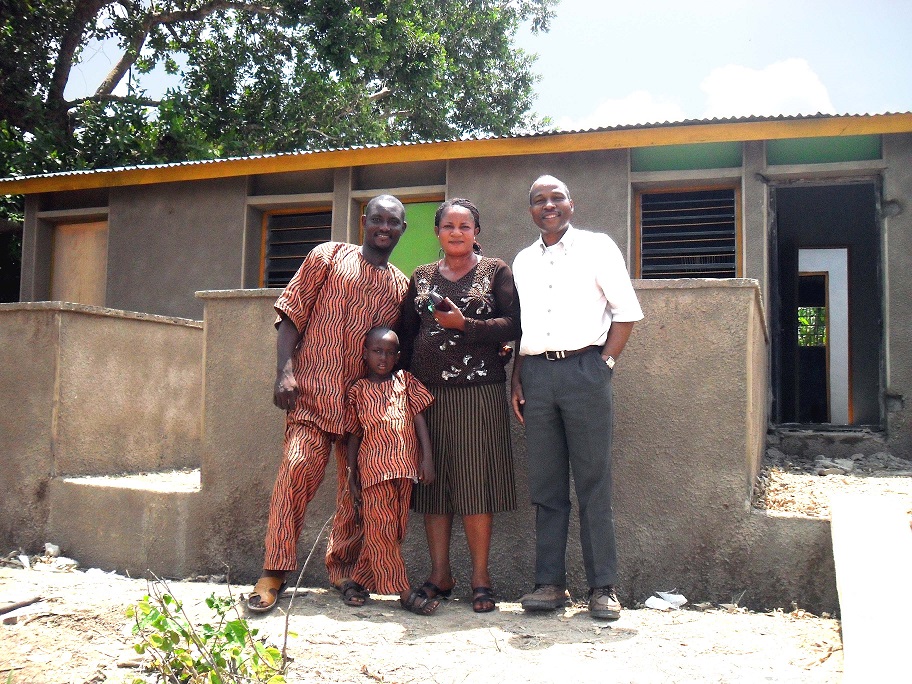 In 1994, Bright came down to Abuja from the northern city of Kaduna where he had been selling car parts. As a single young man ready to put his best out to achieve success, Bright had always desired and fantasied about owning a home of his own; he believed a home is the first thing a man needs to have before marrying a wife and having children.

He initially had to put up with his sister and her husband in Nyanya, a suburb of Abuja. He then built a single room on a small piece of land he had rented that had no toilet or kitchen and began living in it with the hope that he would soon purchase his own land and build his own house. This made him look at his present living condition as manageable.

Every year, as the landowners kept doubling the monthly rent, Bright felt cheated and frustrated, and this led him in 2002 to purchase a land in Nyanya (a suburb in Abuja FCT) with all the money he had saved up. He thought to himself, “Finally, I can start building my home”, but unfortunately for him, the seller had also sold the land to another person. He was advised to immediately erect a structure on the land so as to lay claim to it, but due to lack of money, he could not do so. The other buyer went ahead to build on the land and that was how Bright lost out on his purchased land.

In 2003, with all plans of owning a home seeming far-fetched, Bright decided to use the money he had saved up to get married to his sweetheart, Priscilla, whom he met the previous year. He never planned to keep his wife in a single room with no toilet and kitchen facilities but had dreamt of providing a comfortable home for her. “I had to move on with my life, I wasn’t getting any younger, though I could not provide a good home for my wife. But I pleaded with her to manage what I could afford and promised her a lovely home of her own later. She agreed.”

Two years later, with his dream of owning his own home still burning in him, Bright decided to buy a piece of land from the government and not from private individuals this time around. He and his wife Priscilla put together all the money they had saved and purchased a land in Galadima (another suburb in Abuja), but the papers never came through and he was left hanging with nothing once again. This really upset his wife, as she had invested all her business money into this. And what was really upsetting was that they were still staying in the same room that had no kitchen or toilet!

Later that year, Priscilla gave birth to a baby boy, Ebube. This gift and joy were greatly welcomed, but due to the new addition, their living conditions became even worse. After much petitioning, the landlord finally provided one toilet and bathroom for all the tenants. These were the only facilities available in the vicinity and everyone around came to use them. The couple found themselves sharing the toilet and bathroom with over thirty people.

In January 2008, Mr. Sylvester Onyekachi (Fuller Center Nigeria’s 50th homeowner), who was his friend, visited him and told him that he (Sylvester) was going to be a homeowner soon. This news was both a sad and happy one for Bright. He was happy for his friend but sad that despite all the efforts he had put into owning a home of his own, he was yet to be in his good friend’s position. He and his wife, Priscilla, were encouraged by Onyekachi to come and attend the Fuller Center’s seminar, see other people’s houses and start the process of owning their own home. His wife was not totally convinced, reminding him of how many times they had already been disappointed, but he told her to trust him as he believed this was finally it.

Bright was really impressed with what he saw at the Fuller Center Estate and started the process of owning his own home. Throughout the Fuller sweat equity program, his wife remained in doubt and told him she feared all their effort would come to nought. The waiting period was really a trying time for the family, as they were still staying in a house that brought daily frustrations, but Bright always encouraged himself that Fuller would eventually give him his home. “I kept calling the Fuller office regarding our house and was always encouraged by the staff. This kept my hopes high,” he said.

“I want to appreciate God for His mercy over me and my family. After sixteen years of desiring a home and struggling by my own means and effort to get a house, with no result, I never knew the plan God had in store for us. With God’s divine intervention, we are now proud owners of a home that has a private kitchen and its own toilet, and we don’t have to share this with anybody! I want to thank the staff of the Fuller Center for their words of encouragement, and their humility towards me, my wife and family.”