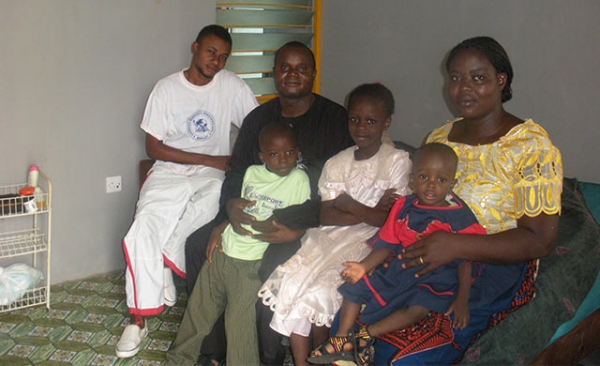 Joseph Nwafor is an electrical technician whose job with a construction company in 1992 got him relocated from Lagos State, in the western part of the country, to Abuja, the Federal Capital Territory.  He got married to his wife, Patience, in 2000 and they are blessed with three kids.

After seven years of working in Abuja, Joseph bought a piece of land in Garki where he built a two bedroom apartment. But the joy of living in his home was short lived. He said as follows: “In 2004, during the demolition exercise in the FCT, we were told that some houses in the area where I resided would be demolished, most especially those close to the roadside. Without prior warning or notice, a bulldozer came pouncing on our house on the 29th of October 2004. We could only get our kids and very few belongings out of the house before it was all destroyed.”

“Without a home and nowhere to go, we stayed by our demolished house for four days; money was an issue to rent an apartment as prices of rent had gone up drastically.”

With the little funds Joseph managed to scout for, he was only able to rent two rooms with no toilet facility (as the existing toilet which was to be shared with ten other families was filled up) and no kitchen, in Mararaba.

The living condition was hell for him and his family. He said, “I would go to work every day without taking my bath and then bathe in the staff’s bathroom in the hotel where I worked. But I always felt guilty when using the bathroom because I knew my family didn’t have the same privilege of bathing in a bathroom; they had to take their bath in an open space at the back of the house.”

This went on for years; the lack of sufficient funds and high cost of rent made it impossible for Joseph to get a decent house to live in. He said further, “In the year 2008, a friend of mine who is a Habitat beneficiary directed me to The Millard Fuller Foundation. The moment I got to their office, I had just one request – “I want a home with my own bathroom and toilet”.

Today, Joseph is a proud owner of a house with a toilet, a bathroom and a kitchen he can call his own. He doesn’t have to share them with anyone. He concludes, “I am grateful to God and the Fuller Center.”