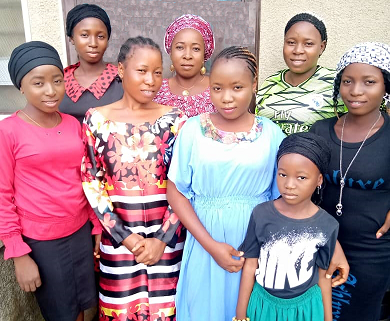 It was a serene Wednesday evening when I strolled through Fuller Estate to have a chat with Mrs Roseline Hussaini who hails from Kaduna State and is a widow with six Children. She wore a welcoming smile when I walked towards the courtyard of her House an indication that she was pleased to welcome me to her Home.

Prior to the demise of her husband, Mrs Roseline and the entire family lived in a small one room apartment in a slum in Karu, Abuja. At this moment she spoke to me in Hausa saying, ‘’my son, life was not easy living in a face me I face you apartment’’. A total of at least eight families had to share a toilet and bathroom you can imagine the challenges that comes with such terrible living condition. There was a time myself and my daughters contracted an infection and we went through a lot of pains and incurred so much expense treating it. At this point we had to result to using a neighbour’s restroom that was just across the street and this made it a lot better but was not the solution to the problem.

Catastrophe struck unexpectedly and my husband who was undergoing training at the ECWA theological school in Kaduna was snatched from us by death through a ghastly motor accident on his way back from training school. This added more salt to the family’s wounds as providing for the large Family was tasking for me alone.

On a faithful Sunday that I wasn’t in church, an announcement was made about an Organisation building Houses for widows. Later that Sunday, my pastor informed me about the development. I was interested and I quickly followed up by buying the application form and attending the scheduled seminar for three weeks after a series of interviews and a home visit I qualified for a Fuller House. At this point in time my primary source of livelihood was baking akara and masa as well as making soya milk and kunu gyada. I also had an extra source of income which was the cultivation and sometimes purchase of grains to store and when the prices increased I resale to make profit.

It is from the little profit I made that I was able to pay the initial deposit of N60,000. It was not easy raising my daughters and paying mortgage monthly. One should know that raising a child does not include just feeding but clothing, education, healthcare and many other necessities. I remained steadfast in making repayment even though things were tight. I had made repayment amounting to over N200,000 and it became almost impossible to make repayment and solution came when it looked as though all hope was lost. A Catholic Reverend Father visited Fuller and after hearing about my Story decided to pay off my mortgage balance alongside that of a single mother who was having repayment issues too.

The joy I feel is overwhelming and my children too have grown older. The Eldest got married and has a daughter thus, making me a grandmother, the second and third are both done with their secondary education and have learnt tailoring and are seeking admission into higher institutions of learning. The fourth and fifth finished secondary education last year and have been helpful towards assisting me in the farm and in my business as well. The last one intends to write her SSCE this year but has been constrained by finance.

With age not being on my side as it was years ago and the daily interface with the heat from the fire I make for frying akara, masa and others I have decided to suspend my akara business for now and continue with my business of selling grains which pays me more. Today I live in my house where I have a bigger space. I don’t have to share toilet or kitchen with anybody and most importantly I have peace of mind. Fuller has impacted my life beyond human comprehension and I have a House of which I can retire to and call mine. Thank you Fuller.