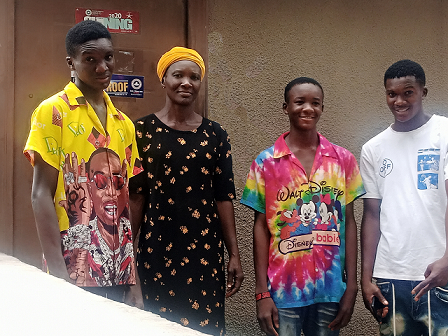 Mrs. Oyewole applied for and got the Fuller house in 2014. She is a single mother and has 4 children, Favour, Paul, Anointing and Blessing. About 2 years after getting the Fuller house, inflation took toll on Nigeria’s economy and the 15,000 naira she earned as a teacher could not enable her make monthly repayments for the house. She started defaulting from one month, to two to three and so on. Fuller decided to find out what was happening to her. It was at that point that Fuller discovered that 2 of her children had begun secondary education and her 15,000 salary was not meeting their material needs anymore. Mrs. Oyewole was really struggling to make ends meet!

Sometime in 2016, a reverend father from the Catholic Caritas heard about the Fuller project and came to inquire what it is all about. We took him to the Fuller houses, where he saw and commended what we were doing. On his return to the office, we briefed him about 2 women having serious repayment challenges one of which was Mrs. Oyewole. The reverend father immediately offered to pay off the balances of their mortgage! Many thanks to Reverend Father Evaristus’ for your kindness through which Mrs. Oyewole has now become a proud homeowner.

Her struggle is still ongoing because she must complete the schooling of her 4 children. Favour completed secondary school and wished to proceed to university but there was challenge of paying for JAMB, SSCE and NECO exams. She did her SSCE first and waited another year for funds to be available to enable her pay for JAMB. In the course of waiting she decided to take up a teaching job, which eventually helped her support her mother’s efforts. Favour remained at home for about four years working to support her mum and younger brothers. She finally got admission to a polytechnic in 2020.